Commodity price shocks – and, notable among those, energy price shocks– are frequently considered among the most important potential threats to the global economy. However, since the second half of the 1980s, energy prices have experienced very large changes, with arguably limited effects on global GDP developments. This apparent change in the relationship has also has been reflected in a decrease in the oil-price elasticity of GDP (see, for instance, Hamilton 1983, Smyth 1993, Mork et al 1994 and Hooker,1996; albeit it is noteworthy to remark that this literature deals with developed economies only).

This column presents evidence that oil shocks just aren’t what they used to be when it comes to macroeconomic effects.

Shadows from the past: The 1970s oil price shocks

Arguably the most traumatic experience in terms of commodity price shocks can be found in the 1970s. The cumulative increases in global energy prices observed in 1973-1974 and 1979-1980 reached, respectively, around 200% and 100%. Both shocks had specific geopolitical origins (the 1973 Yom Kippur War and the 1979 Iranian Revolution), but broader commodities’ price indexes (of which energy commodities are of course an important component) show the same behaviour. As can be seen in Figure 1, these two instances accompanied significant changes in global economic growth, i.e. a sharp deceleration in the first case, and almost stagnation in the second. 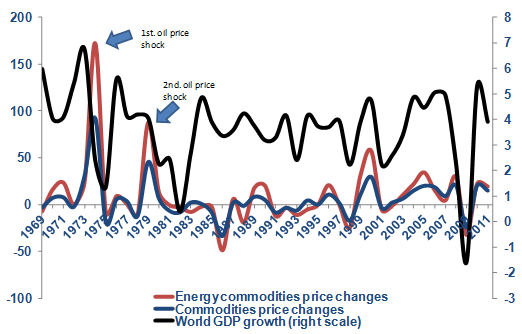 However, and as is already apparent from Figure 1, this negative correlation present during the 1970s to the mid-1980s seem to have changed after that period. Commodity price spikes have not been associated with similar growth slowdowns. If anything, the relationship would seem to be even slightly positive since the mid-1980s.

To assess more formally if this relationship has indeed changed, a rolling five-year correlation window between growth and commodity prices is estimated for the period 1970-2011 (Figure 2). 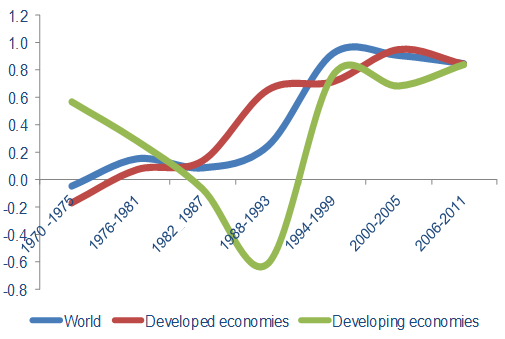 The growth-commodity prices relationship indeed seems to have switched sign since the negative correlations observed until the early 1980s (which imply that an increase in commodities prices is bad for growth). What’s more, the correlation has increased progressively during the 1990s to roughly stabilise since the mid-2000s.

One also observes a convergence between the correlations of developed and developing countries, not only in terms of its size but also of sign. The same pattern holds true if one looks only at energy prices (Figure 3). 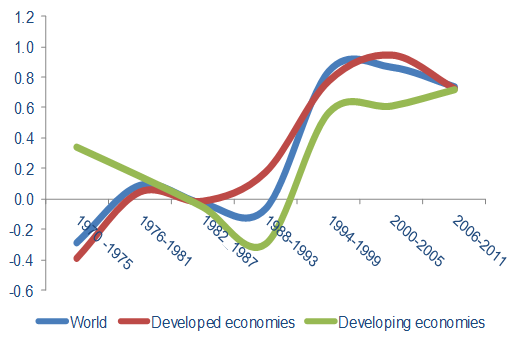 A more formal analysis, namely the regression of annual GDP growth on past GDP growth and commodity price changes), suggests commodity prices have become increasingly positively correlated with GDP since the 1970s (Figure 4). Moreover, larger relative changes in the coefficient have been observed in developing economies.

Figure 4 . The effect of commodity price changes on growth 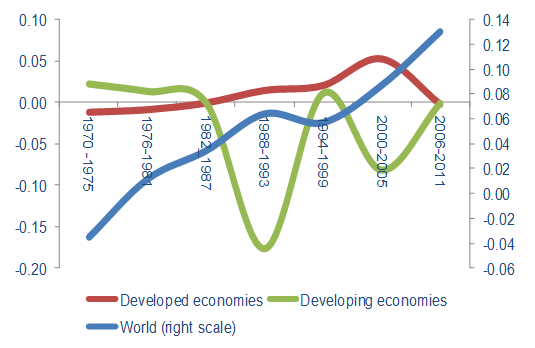 Again, this holds if we consider only energy prices (Figure 5).

Figure 5 . The effect of energy-price changes on growth 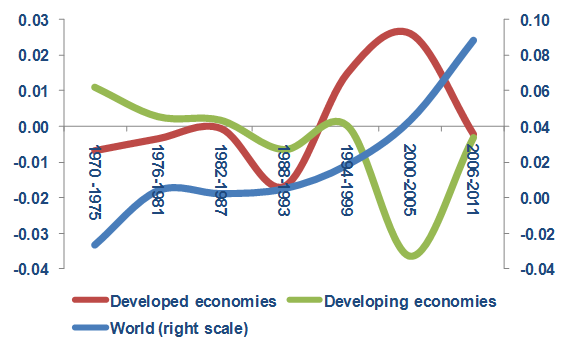 Developing economies are, of course, a very diverse universe, which goes from commodity-exporting Nigeria to commodity-importing India. We will look at broad regional developing-country aggregates, to see what differences, if any, they reveal concerning their reaction to commodity-price shocks.

Figure 6 below plots the correlations between GDP growth and commodity price changes. Even with significant regional variation, there is a common upwards trend to a positive correlation across   all   developing regions[1]. Correlations using changes of commodity energy prices show the same pattern (Figure 7).

Figure 6 . Correlations between GDP growth and commodity-price changes by region 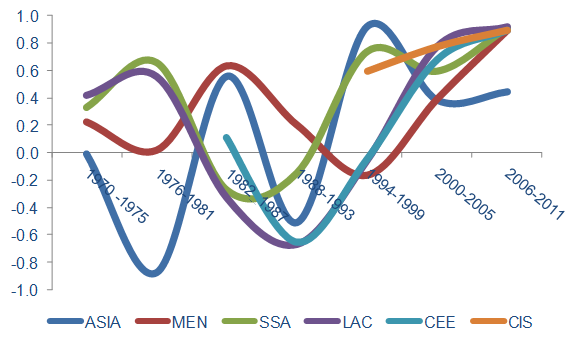 Figure 7 . Correlations between GDP growth and energy-price changes by region 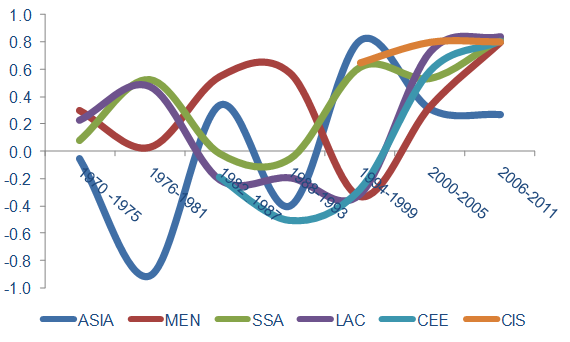 A regression analysis similar to the one described above also supports the previous conclusion. On average, the regression coefficient associated with commodity prices has become increasingly positive since the 1970s across developing regions (see Figure 8, which shows the coefficients for energy prices).

Figure 8 . The effect of energy-price changes on growth across developing regions 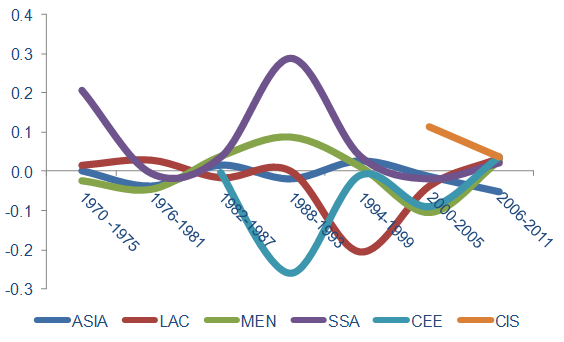 This column argues that there are signs that the global economy is more resilient (albeit certainly not immune) to commodity-price shocks than normally thought. This result finds support in both correlations and regression analysis, and had already been observed in several earlier works looking at the oil-price elasticities of GDP. Also, this is a conclusion that holds true for both developed and developing regions, and also broadly among different developing regions.

It is not the aim of this piece to look at reasons behind the correlation patterns, but some intuitively come to mind. One could be the greater commodity efficiency since the 1970s, or more robust policy frameworks and responses, such as greater central bank independence and inflation-fighting capacities (Bernanke et al, 1997), floating exchange rates, or sovereign wealth funds and fiscal rules. Additionally, a more geographically diversified and abundant set of sources for energy commodities, with the ‘shale’ oil and gas revolution, could be behind the changes in correlations.

Finally, and given the importance of developing economies for global growth, it should be pointed out that, while they are still converging to developed-country income levels, which implies that their growth process could become more commodity-intensive in some areas, they are also to experience this process with new technologies that are less commodity-intensive than those used by developed economies when they were at a similar level of development. Additionally, as development implies a convergence to an economic structure more concentrated on services and with less need of infrastructure investment, their sheer additional demand for commodities will abate. On balance, those forces combined may result in an even smaller sensitivity to commodity shocks.

Editor’s note: The views expressed here are the author’s own, and do not necessarily represent those of his current or previous employers.

[1] We use here the IMF breakdown for developing regions: ASIA is developing Asia, CEE for (non-EU) central eastern Europe, CIS for Commonwealth of Independent States, LAC for Latin America and the Caribbean, MEN for Middle East and north Africa, SAS for South East Asia and SSA for sub-Saharan Africa.